Whether you call it a puma, cougar, panther or catamount, the mountain lion is a beautiful and powerful creature. These giant cats are the largest carnivore native to North America and most hikers would shutter at the idea of running into one.

Recently, a video from a hiker in northern Utah encountering a mountain lion went viral… And tons of people sent it to me. Watch the clip that‘s been making the rounds on Instagram and Twitter:

Let’s be honest, just watching this clip is enough to make many hikers afraid to ever step out on the trail again. However, a mountain lion encounter like the one shown above is super rare. In fact, sightings in general are rare. When we take the necessary precautions in cougar country, there’s no need to fear being attacked.

Getting To Know Mountain Lions

In order to be prepared for a mountain lion encounter, it’s important that you understand these stealthy animals and their behavior. Unlike bears or other large predators found in the Americas, cougars can be a bit complex and hard to understand.

The mountain lion, or Puma concolor has roamed North and South America for around 100,000 years. Once upon a time, they were widespread throughout both continents from coast to coast. This range is the reason why these cats have so many different names. The truth is that mountain lion, puma, cougar, deer tiger, catamount, ghost cat and lots of other names all refer to the same exact animal.

Unfortunately, due to deforestation, an increase in the human population and lots of other factors, their range is now much more limited. They’re currently extinct on the east coast of the United States, so you won’t run into a cougar east of the Mississippi River.

Instead of settling in a den or singular spot, the mountain lion’s “home” territory can take up hundreds of square miles. They’re constantly roaming, looking for prey.

Today, pumas live in the western United States. You can get more detailed information on mountain lion sightings in your state by clicking here. They can also be found throughout Canada, Central America and South America.

Fortunately, cougars aren’t keen on making humans their prey. However, they‘re carnivores and they feast on lots of other mammals such as squirrels, rabbits, beavers, coyotes and (especially) deer. In many places, mountain lions actually play a huge role in keeping the deer population regulated.

Mountain lions are pretty distinguishable from any other animal native to the Americas. They look a bit like the African Lion, but smaller and without a mane. They’re known for their short, tan colored coat with a white underbelly and a small head. They also have a long and heavy tail which makes up about 1/3 of their total body length.

Mountain lions usually stand between 1.8 and 2.4 feet when on all fours. Males are between 125 and 220 pounds while females are usually between 75 and 140 pounds. Most lions are between 5 and 8 feet long when measured from head to tail.

In the wild, mountain lions usually live for around 10 years, though animals in captivity can live to 20 years.

In the wild, female lions raise their own kittens (or cubs) by themselves and teach them how to hunt. Once the kittens are 1.5 – 2 years old, they’re off to live and hunt on their own.

Being Cautious In Mountain Lion Territory

No matter what your circumstances are, it’s important that you take precautions when hiking in cougar country. It’s always best to hike in groups. The more people you have, the less likely you‘ll be to encounter a lion.

Try to be as loud as possible while trekking. Talk loudly, sing, laugh, bang your hiking sticks together and do whatever you can to let any nearby lions know that you’re close. The last thing you want to do is surprise a mountain lion.

If you’re hiking with pets or children: keep them close by. Don’t ever let them run ahead on blind curves or to anywhere that’s out of your reach. When it comes to dogs, keep them on a short leash. Canines have been known to intimidate cougars, and they may be mistaken as prey.

Also, be especially careful in areas of thick brush and near mountains/large rock piles. This is where mountain lions like to spend their time.

Since mountain lions often hunt deer, and deer are most active at dusk and dawn, it’s best to avoid hiking at these times.

Sometimes, cougars will capture their prey and keep the carcass for weeks at a time. If you spot a mauled animal, quickly leave the area. Cougars are defensive over their food. Also, look out for cougar scat which is significantly larger than deer droppings.

If you see a cub, get away quickly. Like bears, a mother mountain lion does not like it when you mess with her babies. This is what appears to have happened in the video above, hence why the man recording was followed for such a long period of time.

When Encountering A Mountain Lion

Despite the slew of frightening viral videos that surround this elusive creature, it’s quite rare that you’d spot one in the wild.

If you do happen to meet one on your next hike, here’s what you should do:

Come Off As A Threat

When you come face to face with a cougar, the ultimate goal is to scare it away while giving it more than enough room to escape. The best case scenario is that you spot the animal before it sees you. In this instance, you should do your best to quietly leave the scene and change your path while keeping your eyes on the cougar.

If the animal does see you, it may act aggressively toward you. This is what happened in the viral video shown above. It’s clear that the cougar is trying to scare the human away. You must assure the animal that you’re a big, strong human and not prey.

Aggressive behavior can actually be a good thing and an indication that the animal feels threatened by you. If it thinks you’re dangerous, it‘ll usually stand its ground- but eventually back off.

If a cougar is still and silent, this does not necessarily mean that it won’t attack. These creatures rely on the element of surprise when catching prey, so this could be a bad sign. You must show that you’re strong, healthy and aggressive by following these do’s and don’ts:

If A Mountain Lion Attacks

Cougar attacks are super rare, but they do happen every once in a while. Knowing how to handle the situation can mean the difference between life and death.

The best thing to do when a mountain lion attacks is fight back. Use rocks, sticks or any other hard objects that you have available. If you can’t reach anything without bending over or crouching down, then punch and kick with all your might.

It’s important that you do your best to remain standing while being attacked. Don’t let it get you on the ground. They like to go for the neck and the back of the head, so you must keep these areas protected.

Did The Man In The Video Act Accordingly?

In the video shown above, the man behind the camera made a huge mistake right off the bat. At the beginning of the video, he sees lion cubs ahead on the trail and he continues moving toward them. This is rule number one in mountain lion safety: DO NOT APPROACH A LION, ESPECIALLY NOT CUBS!

Also, instead of recording the entire encounter (although I am thankful he documented this experience so that it can be used as an example), he should have been focused on looking big and scaring the lion away. At about 1:02 into the video, it appears that the man bends down (perhaps to grab a rock), and the cougar charges at him. As stated previously, bending or crouching will make you look like prey to a mountain lion.

However, there are a few things he did correctly, such as walking backwards, not running and speaking loudly/aggressively to the animal. We obviously can’t tell if he was making eye contact with the animal like he’s supposed to, though it seems that he was finally able to scare it off with an act of aggression at 5:39.

Mountain lions are majestic, mesmerizing and powerful creatures. It‘s important to learn how to respect these animals while also being prepared to face them in the wild. While you may think they‘re scary and vicious, they probably feel the same way about you!

Every year, humans are responsible for around 3,000 cougar deaths– and these animals must be protected. If you see one in the woods, act with purpose and not impulse. 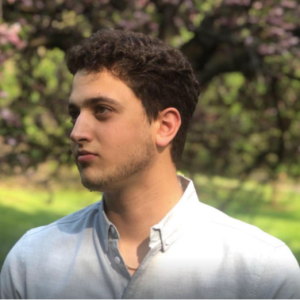 My name is Mike Nicosia, and I am the face behind Conquerwild.com. I'm a writer who's passionate about camping, hiking and all things nature. I create content that's aimed at helping you improve your experience out in the wilderness. I encourage all readers to conquer their fears, push their limits and become one with nature.
Share on facebook
Share on twitter
Share on email
Share on print

As an Amazon Associate I earn from